Iron Maiden: Legacy of the Beast is a Role-Playing Game available on Android and iOS devices based on the many images and lyrics of the band Iron Maiden and their mascot Eddie. The player controls a wide variety of incarnations of Eddie as Eddie travels through numerous fantasy depictions based on the songs of Iron Maiden.

Game Play
The game play is a turn-based battle strategy with the player controlling a small team of characters against similar-sized opponent teams. As with the lyrics of the songs, the game's characters and locales are inspired by both real-world history and high fantasy such as Egyptian Pharoahs, wars, expansionist civilizations and various pantheons. Every element of the game will always have a link (sometimes tenuous) to a song by the band.

Teams can be put together from the player's roster of characters and the roster can be steadily expanded, even with duplicates, from a selection of more than 400 separate identities. Each identity has their own unique set of abilities and progression possibility. Expansion of the player's roster is often via the Gacha game mechanic (random drop from a selection) and so expansion of the roster can often be frustrating with high likelihood of repetitive common characters.

The player has a rank of their own which determines a variety of limitations in the game including only half the player's rank in friend players, called Troopers. In addition to their own roster of characters, players can borrow a Champion character from a friend player once per day per friend. Starting at level 1, the player will quickly rise past the lower numbers but the progression is longer between each successive player rank. The maximum rank is level 100 at which the player has attained 50 slots for Troopers. In addition to the 50 slots there are always three free Troopers which are the same for every player.

Currencies
The game is entirely free to play but players may invest real-world money for artificial increases to the base game play. Like many Gacha games, there are a plethora of items which ultimately work as different in-game currencies and methods exist for exchange rates between currencies that guarantee devaluation if exchanged back.

There are three such currencies which limit the amount of play and the player must have sufficient Sands of the relevant type to take part in any of the activities within the game.
Multiple other currencies exist:
Character Progression
Each character begins at Level 1 with a Star rating. Experience Points can be earned for each character individually through battle in the RPG elements (but not Arena/Clan) or Experience Points can be purchased. The number of levels the character may progress is limited by their current Star Rating: 1* = level 20; 2* = level 40; 3* = level 60; 4* = level 80; 5* = level 100. When reaching the maximum level for a star rating less than 5, the character can then be evolved to the next star rating, sacrificing all earned levels in the process.

For a small but growing number of characters, upon reaching level 100, the character may go through a process called Awakening and earn even stronger attributes and abilities. The character remains at level 100 throughout their awakened existence but their star rating does progress from 5* Gold through a succession of Purple star increases to 5* Purple. A 5* Purple character can be awakened once more to a 5* Red character.

In addition to the innate abilities and statistics of the character, every character has six Talisman slots. Talisman are the only character equipment in the game and provide the character with increases in statistics and, when placed as a complete set in multiple slots, with an expansion of abilities. Between 1 and 3 of the Talisman slots available are predetermined to only be used by a Talisman of specific classes. The abilities of the talismans sets are only unlocked when the predetermined number of talisman are fitted to the same character. So, for example, the Grail talisman set requires 2 Grail talismans to be fitted to the same character. There are many sets which require 4, 5 or even 6 slots to be filled of the same talisman and as such cannot be fitted to characters which limit the slots to a different class type. 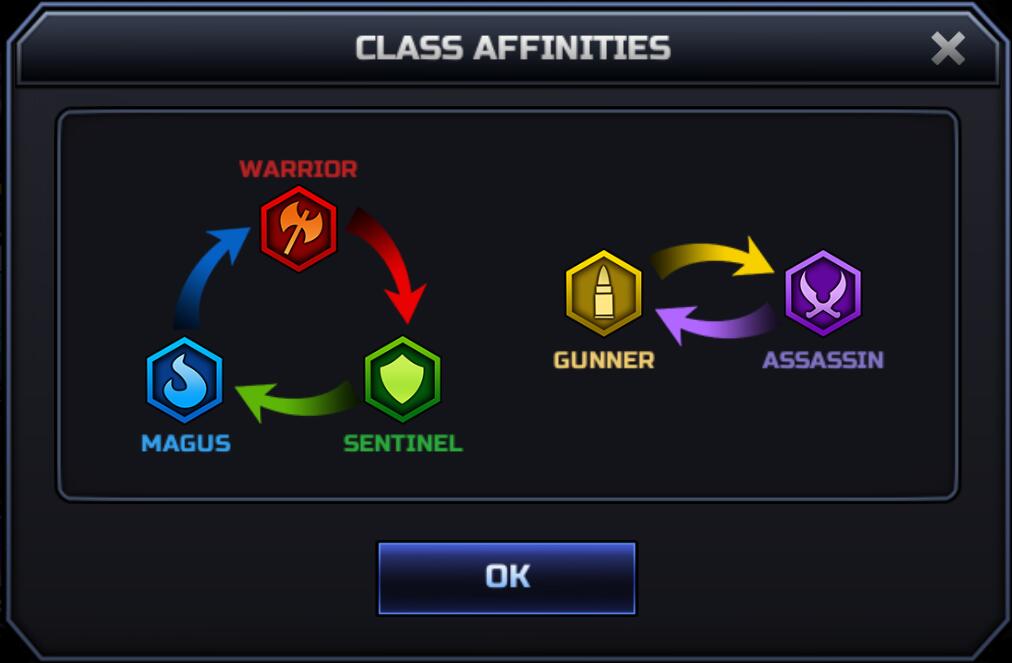