MAME stands for Multiple Arcade Machine Emulator. When used in conjunction with an arcade game's data files (ROMs, CHDs, samples, etc.), MAME attempts to reproduce that game as faithfully as possible on a more modern general-purpose system. MAME can currently emulate many thousands of classic arcade video games from the very earliest CPU-based systems to much more modern 3D platforms.

For submissions using the Multiple Arcade Machine Emulation platform, Twin Galaxies only accepts submissions from versions of MAME that provide the ability to record "INP" files.

INP files are essentially a recording of all the input data that the MAME program receives from you during a play session, and this recording allows for your gameplay to be identically played back by others with MAME for examination in real time. 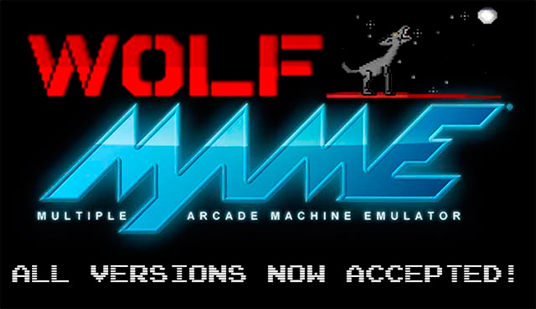 There are many versions of MAME that are available. Historically, Twin Galaxies has encouraged the use of a version called WolfMAME since it specifically contains limitations on some general MAME options that may be unfairly used by a player against the rules. Submissions using WolfMAME will tend to be more initially trusted - However, submitters are free to use whatever MAME version they would like as long as that submitters enter in the 3 digit version number of the version of MAME / WolfMAME that was used for the score performance.

MAME submissions not using WolfMAME are only allowed if video of the complete performance is provided along with INP. The video of the non-WolfMAME score performance must visibly show hands and controls throughout gameplay. It must also show start up of game launch.

The General Guidelines that apply to all MAME and WolfMAME submissions are as follows:

All MAME submissions are expected to follow all generally accepted and announced TG gaming guidelines during commission of your gameplay...no cheat codes, no turbo controllers, no glitch-abuse or non-approved hunting/leeching tactics, etc.

Showing the dip settings in every MAME and WolfMAME video submission is HIGHLY RECOMMENDED but not required.
It only takes a few seconds to make it simple for adjudicators to compare and see if the settings of the performance match the rules of the track.